We specialise in civil and criminal litigation in the High Court and Magistrate Court- including but not limited to Family Law, Labour Law, Commercial Law, Insurance Law, Pension Law and Debt Collection. Our firm offers notarial- and conveyancing services to clients at competitive rates.

The team at Forbes Attorneys dedicate themselves to excellent service delivery to clients within a short turnaround time. This will inter alia include clarifying the legal solution in a manner that is understandable and cost effective to the client. At Forbes Attorneys we endeavour to practise law with the highest standard of ethics and professionalism. Our approach is friendly and helpful to clients. Services rendered by the firm should go above and beyond client expectation – ultimately creating a win-win situation for both the client and the firm. Ultimately, Forbes Attorneys wants to create a firm which is sustainable, demographically representative and a consistently growing and loyal client base.

Claire Forbes graduated from the University of Stellenbosch in 2002 where she obtained degrees in BA LLB and a LLM degree in Mercantile Law. During her studies, she pro-actively became a tutorial assistant, as well as a research assistant to Professor Juanita du Plessis. Additionally, she lectured first-year students in the subject Introduction to Law. Claire has been practising in Cape Town ever since specialising in Labour Law, Family Law, Commercial Law and Debt Collection for prominent South African companies. She was admitted as an attorney of the High Court in February 2005 and a Notary Public in November 2005. In May 2010, Forbes Attorneys was established. 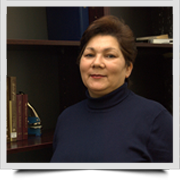 Gwendoline Petersen has been a personal assistant to litigation attorneys and judges of the Cape High Court for the past eighteen years and now fills the position of Office Manager at Forbes Attorneys. Gwendoline’s vast experience as a litigation secretary has ensured excellent maintenance of the office, as well as client relationships.